Nalmoe Village is the Korean name for Bisan-dong. The crown and Bronze Age artifacts such as bronze dagger and sheath were found in Bisan-dong regions, and it is assumed that ruling classes lived in the region during the Bronze Age.

In the southern part of the church, there are Bronze Age artifacts and a design wall expressing the Bisan-dong tales such as Wongogae-gil, Nalmoe story, and herring spring. The design wall also expresses the Saint Yunil Lee and history of Bisan Catholic church. The surroundings of Gyeongbu Line railroad are themed “Street”. The road to Seoul now became the road connecting the past-present-future. In the western part, the walls are decorated with children playing traditional games such as Jachigi (hitting with two long and short sticks), Biseokchigi (Knocking down other’s stones with small stones), and ssireum (Korean wrestling).

The construction work for Garo Park started in November 1995 and completed in March 1996. In Garp Park, there is a monument stone indicating that the 1st Fence Demolition Movement originated in Garo Park and a photo zone for young people.
The Fence Demolition Movement got activated after demolishing the fence of Seo-gu office and the movement became the source of community culture by demolishing the fences of all public office buildings in Republic of Korea.
The Fence Demolition Movement is rated as the example for the harmony of Open Administration and social participation of citizens. The movement got Urban Environment and Culture Award in 2002. The movement is also the proud of Daegu Seo-gu and it was covered in high school textbook in the title of “Human, Society, and environment”. 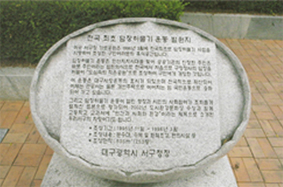 In response to the movement, the demolition work started in November 1995 and was completed in April, 1996. The work involved 250m areas and 250 million won was spent.
The Fence Demolition Movement got activated after demolition of fence in Seo-gu office. Therefore, Seo-gu office became the origin for the project demolishing the all public office fences in Republic of Korea and creating the community culture.
The Fence Demolition Movement in Seo-gu office started from the Daegu Love Movement Citizen Association (Co-chairman : Mayor. Haenyung Cho/Representative : Hoyung Jeon of Daegu Citizens’ Coalition for Economic Justice) and developed in to the citizen movement for demolishing the fences for procuring green zone in urban areas and creating open social atmosphere. With active participation and supports from the citizen, Fence Demolition Movement became settled as the voluntary civic movement. For the last years, the movement has been benchmarked by most of administrative institutes such as Seoul, Busan, Incheon, Gwangju, Daejeon, Ulsan, Hanam, Bucheon, Changwon and other civic groups such as Seoul Citizens’ Coalition for Economic Justice, Gumi Citizens’ Coalition for Economic Justice, and members of Bucheon and Yeosu Agenda 21.
In 2002, Fence Demolition Movement was also covered in high school textbook (Bobmunsa) in 「Human Society and Environment」 chapter. In addition, students and professors from universities visited Daegu Love Movement office for their paper and civil servants and citizens from other cities and districts are continuously visiting the field of Fence Demolition Movement.

Key Achievements of Fence Demolition Movement The Fence Demolition Movement goes beyond the simple opening of closed space. The movement develops into the “Happy Village” movement by promoting the interaction between neighbors, demolishing the walls between people, and enhancing citizen’s cooperation and participation for creating parks and green zone. Furthermore, the movement makes the desolate and confined urban streets into bright and pleasant street and arranges rest area for citizens, space for communication, children’s playground, and space for village culture around Garo Park. The Fence Demolition Movement has accomplished excellent achievements.
. In addition, urban forest was made after demolishing the fences. Although Daegu was known as the hottest city in Korea until 1995, the urban forest helped reduce the temperature since 1996 and the temperature was lower than other inland cities such as Seoul, Daejeon, and Gwangju for the recent years. Currently, the Daegu temperature is maintained at the level of marine cities such as Busan, Incheon, and Ulsan. 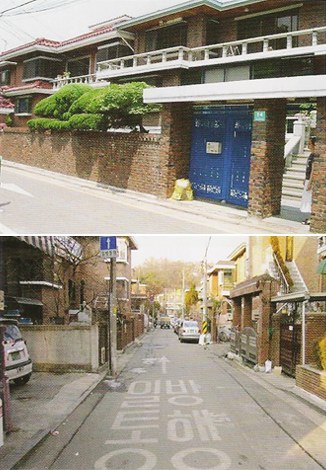 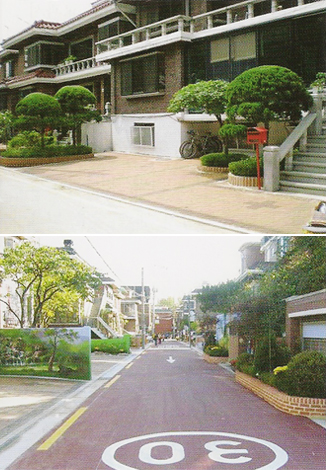